Cleethorpes Band has a long history of nearly 140 years in the town. Owen Harden has been researching our roots and has kindly contributed these articles.

My earliest memories of Cleethorpes Borough Band, as it was then known, are of joining it in January 1960. The bandroom, at this time, was situated in the Cleethorpes Council yard in Poplar Road. This building was a dismal place, full of cobwebs and soot from the 'heating system' which was a coke stove in the centre of the room. The stove was surrounded by old twin bus seats on which the few players sat and hopefully survived (if they didn't pass out from inhaling smoke and coke fumes) until the end of practice, when the room had just begun to warm up! Thankfully within a year things had improved somewhat as can be seen in this Evening Telegraph article of 1961. 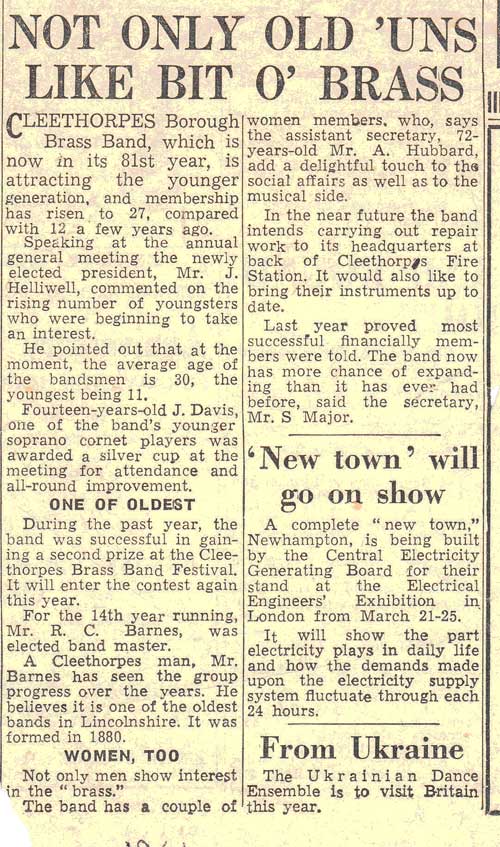 The article provides an interesting start to a history of the main events of the band.

Above is an early photograph of the band circa 1925 (additional details in part 2). The picture was featured in a Hobbies for All Exhibition at the Cleethorpes Memorial Hall in the 1970s.

Following my commencing article of the bands history I must first say that my comments referring to the state of the band room at that time were a statement of fact and in no way a reflection on the band members. Indeed in 1947, their foresight, dedication and hard work had secured the purchase of their own bandroom. The building was an ex-army war department pre-fabricated sectional design purchased at auction, on the bands behalf, by Ted Bland for 18 shillings per section. The structure consisted of thirty sections and with transport costs resulted in a total purchase price of approximately thirty pounds. With the help of the borough council a site was made available for it within the council yard and a lease negotiated at a 'peppercorn' ground rent of one shilling per year (5p in today's money). These events marked an important milestone in the bands history as the new bandroom was to be its first permanent home and served us well for over fifty years. Three band members in particular deserve a mention at this point, being foremost in the negotiations. They were Ted Bland (cornet), Jimmy Cox (Baritone) and Cecil Wilson (Percussion). The efforts of all band members then turned to the gigantic task of laying a concrete foundation and erecting the building onto it.
A copy of the plan for the building and the planning permission documents, too large for inclusion here, will be added to the band archives

Most details of the old photograph included with the previous article have now been unearthed from the band archive and information given by Ted Bland. The date of the picture was between 1925 and 1926. The two cups shown were won at a quartet, March and Selection contest held in Hull. Ted believes that the photo was taken in front of Cleethorpes Bowling Club. The names of several members have been identified and added below the image.

Margaret Smith contacted the band to help her family history research. Margaret's Grandfather, G. M. Hart, was the Trombone player pictured fourth from the left on the back row. We managed to find other photographs for Margaret from the 1925 to 1937 era taken from the Photographic Band History compiled by our very own "Mr. Photo" Barry Mathews.

In 1923 The Band Entered The National Band Festival held at the Crystal Palace. A copy of the programme cover and a list of bands, including Cleethorpes Silver, competing for "The Cassell's Saturday Journal" Challenge Shield are shown below. 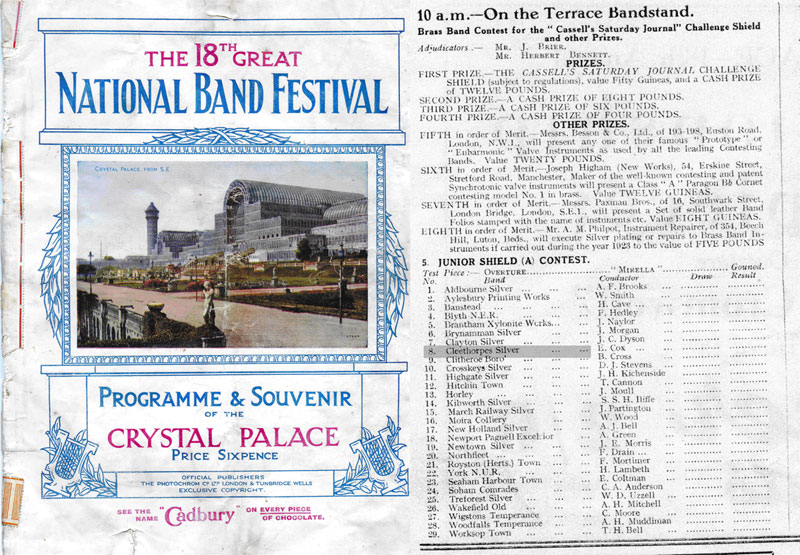 The 18th July 1953 marked a special social event when the band formed a guard of honour following the marriage of John and Noreen Lofthouse. John was a Cornet player in the band (Noreen was not a band member or a brass player!). Ted Bland was John's Best Man and supplied the following photograph along with the players' names.

Many Brass Bands in this country are made up from families and friends. The Barnes family had given sterling service to Cleethorpes Band for a great many years, Russ Barnes was Bandmaster from around 1940, having moved to Cleethorpes from Alford, until 1963. During this time he taught a large number of youngsters to play including his children Peter, John and Jean. Jean Gable (Nee Barnes) who recently visited the band's website has kindly submitted this lovely warm family picture shown below of them being taught at home by their father. I think this captures exactly the theme of this History of Cleethorpes Band.

Also around 1953, the band competed in the Midland area qualifiers for the National Brass Band Championships in the fourth section. The band was placed second but later upgraded to first following the disqualification of Croft Silver Band.

The National Finals were held at Kensington Town Hall in London. Although the band played at the contest the final placing is unknown.

The next photograph shows the band rehearsing in the bandroom in 1963 under the direction of Band Master, Albert Weston. Note that the soot and cobwebs have, in the main, been removed, the bus seats have gone and the heating stove has been moved away from its former central position. Although a new fluorescent lighting system was being installed at this time (as can be seen above the cornets) part of the old lighting system of br bare lamps strung together with thin flex was still in use above the Bass section! Sheet music was stored in cardboard boxes in the corner of the room. Later, a library was built there along with an instrument store in the opposite corner.

Thanks to David Hubbard (a front row cornet player at that time) for supplying the photograph. After visiting the website two ex players contacted the Band and identified themselves, Mike Buffam ex Solo Cornet player then 12yrs old and W.H. Wilson who saw himself as a very young Baritone player. My thanks to these two ex players, every little bit of info helps, and it would be good to see them visit the Band room. Does anyone recognise the three players we can't identify?

During the next few years from 1963 work continued with more improvements to the Bandroom and it facilities. Attention was sharply focussed on this at one evening rehearsal, Arthur Bradley (a cornet player and committee member at the time) came struggling in with a huge adjustable metal support pole announcing that one of the principle beams above the bass section was in danger of imminent collapse and that we should all leave the building. This was due to ingress of rainwater over many years, resulting in wood rot. No one moved and Albert Weston, who was conducting at the time, carried on regardless as did the four bass players who parted, two each side of the rotten beam! The supporting pole was duly installed and repair work carried out over the next few weeks. The whole of the old roof was removed and replaced with a new plywood and felt tile roof. This work was carried out by members of the band and throughout, the band played and rehearsed merrily on!

A booklet published in 1972 mentions all the above work and the building of a canteen. What the booklet omits to say is that the sink emptied into a large bucket! It was very uncomfortable serving tea with wet feet, as many unwary helper found out! 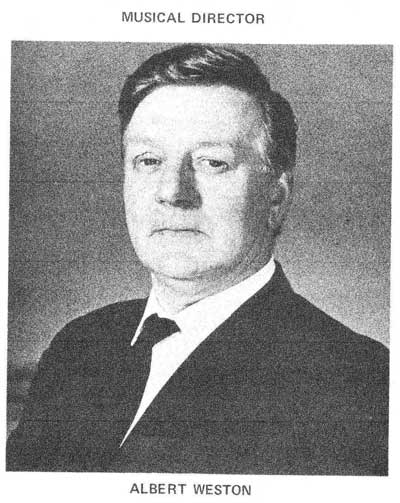 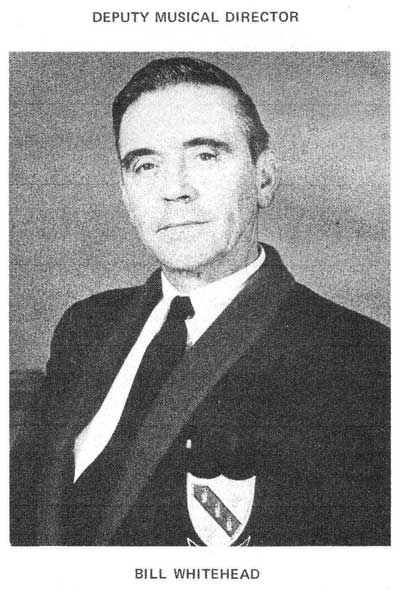 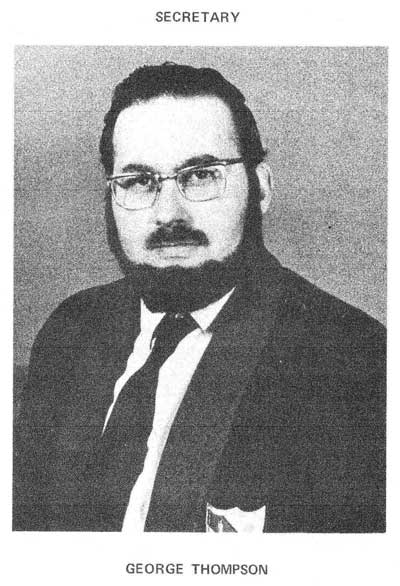 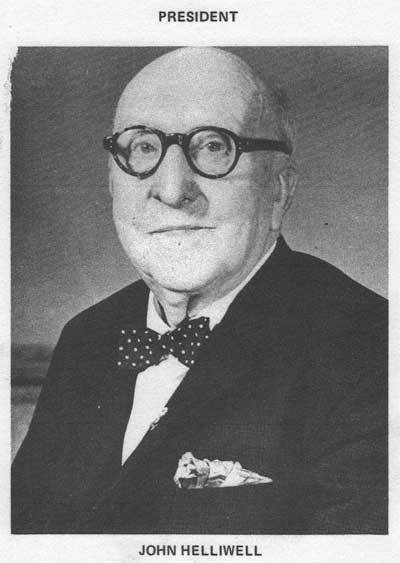 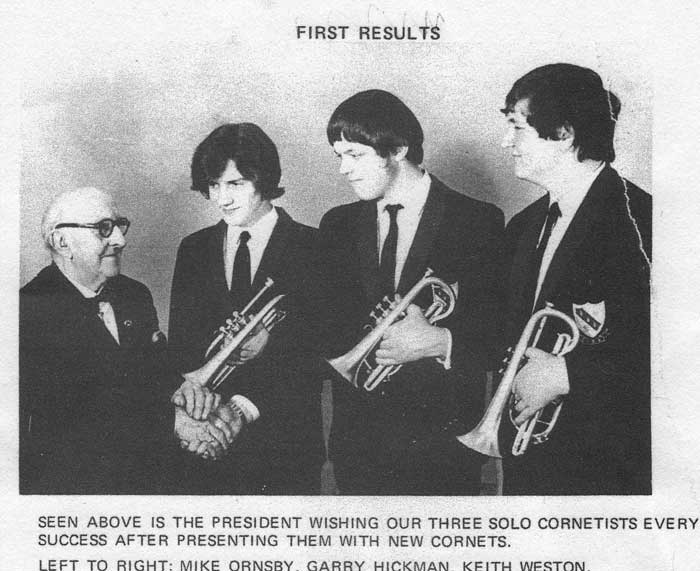 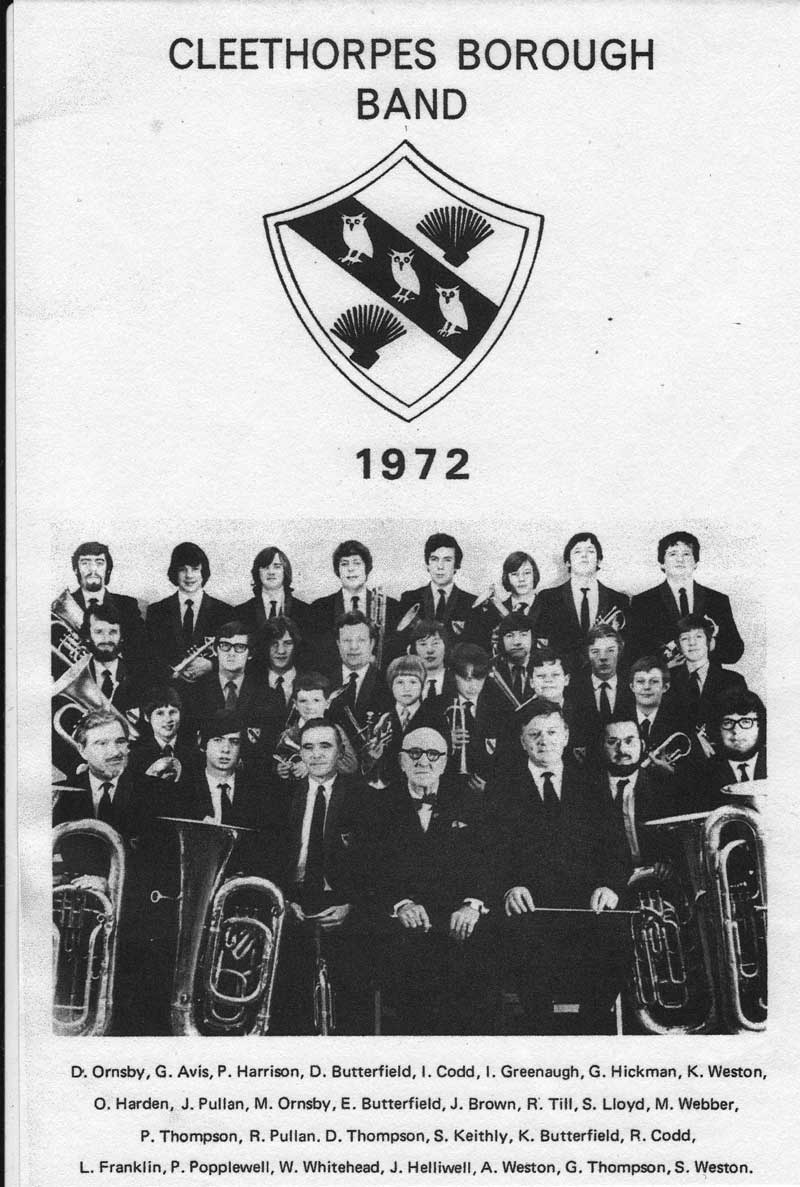 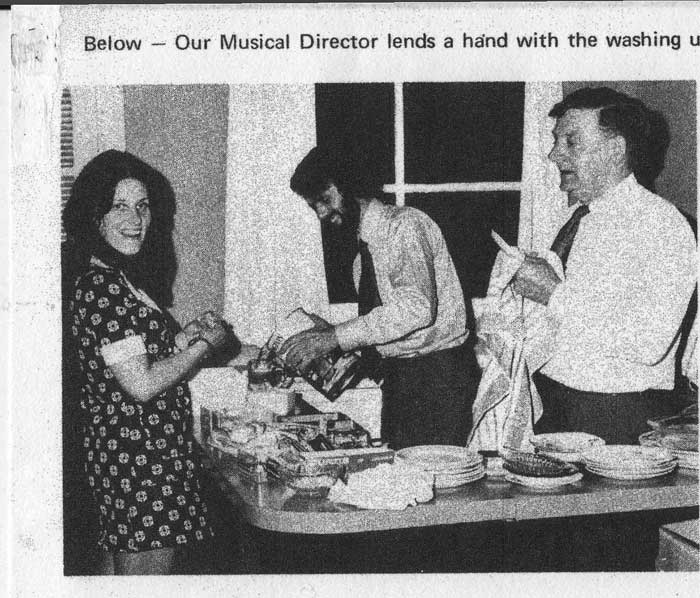 I start this part of Memory with a recent article written by Sam Smith (a current cornet player with the band) and Ted Bland (a former cornet player).

Before television took off in the 1950s, the major form of entertainment to the British Public was the wireless. The rich and poor would listen to all forms of entertainment from sport, drama and plays to comedy shows.

In 1934 the great depression was still a fact of life in Britain and people continued to depend on radio for escape and companionship in those troubled times. Hitler had recently become the chancellor of Germany and by August 1934 had declared himself Fuehrer. Ramsay Mac Donald's national coalition was in power, the Gresford disaster (one of the worst tragedies in Welsh Mining history with the loss of 266 men) and the introduction of road safety measures with Belisha beacons making the daily news.

On the evening of Saturday 28th July 1934 a large percentage of the British population had finished their dinners and gathered around the radio in their parlours to be entertained at 7.00 o'clock by the Cleethorpes Silver Band. The photograph was taken outside the Sunnyside Club on Grimsby Road (later to become Darley's Hotel) where the band room was situated in the grounds.

The Band played a one hour program of music as printed in the Radio Times under the direction of conductor Walter Charlton, not T. Cocking as shown. In the weeks after the broadcast the band received accolades on their performance from all parts of Britain and even a letter from a listener in South Africa who had listened to the broadcast and wrote a letter of appreciation to the band.

The next encounter with radio was during the 1980s when Radio Humberside ran a competition for bands from the region entitled "Where There's Brass." This was an entertainment contest where the competing bands played a programme of their own choice and were judged on entertainment value as well as musical skill. The 1982 competition culminated in a grand final held at Hull City Hall. Cleethorpes Band and Grimsby Band competed for the title "Radio Humberside Band of The Year." A very tense and hard fought encounter ended with Grimsby triumphant on the day. Following the contest the two bands combined to give a concert with inspired conducting from the great Harry Mortimer. 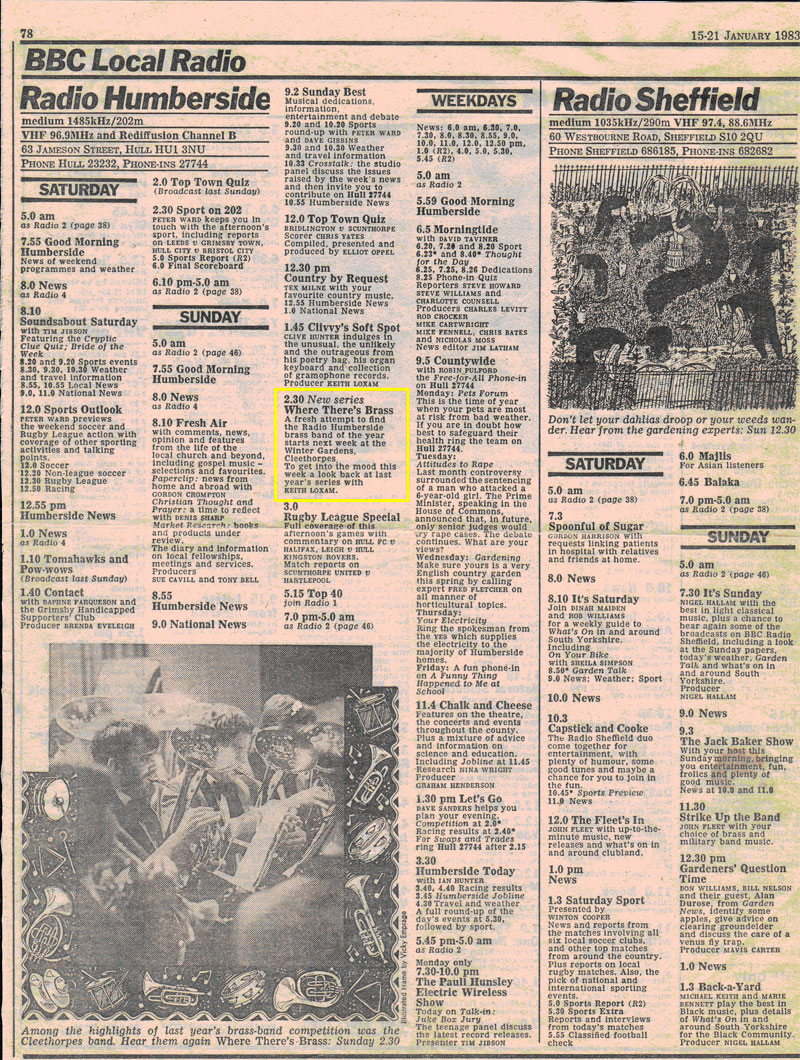